This past weekend I had the lucky chance of visiting Yayoi Kusama’s Infinity Mirrors exhibit in the Hirshhorn. To say the least, the experience was enthralling and highly engaging. There were many moments whereupon stepping into a room our first reaction was an amazed “wow.” Despite the colorful and enchanting portrayals, the meaning behind her art comes from a very personal perspective and expands to an at large cosmic interpretation of life. Beautifully created, Yayoi Kusama’s Infinity Mirrors, and curated by Mika Yoshitake, the exhibit is an inevitable experience that must be seen by anyone who can visit.

Guided by her unique vision and unparalleled creativity, critically acclaimed artist Yayoi Kusama has been breaking new ground for more than six decades. In 1993, she became the first woman to represent Japan at the Venice Biennale, and last year, Time magazine named her one of the world’s most influential people. Born in 1929, Kusama grew up near her family’s plant nursery in Matsumoto, Japan. 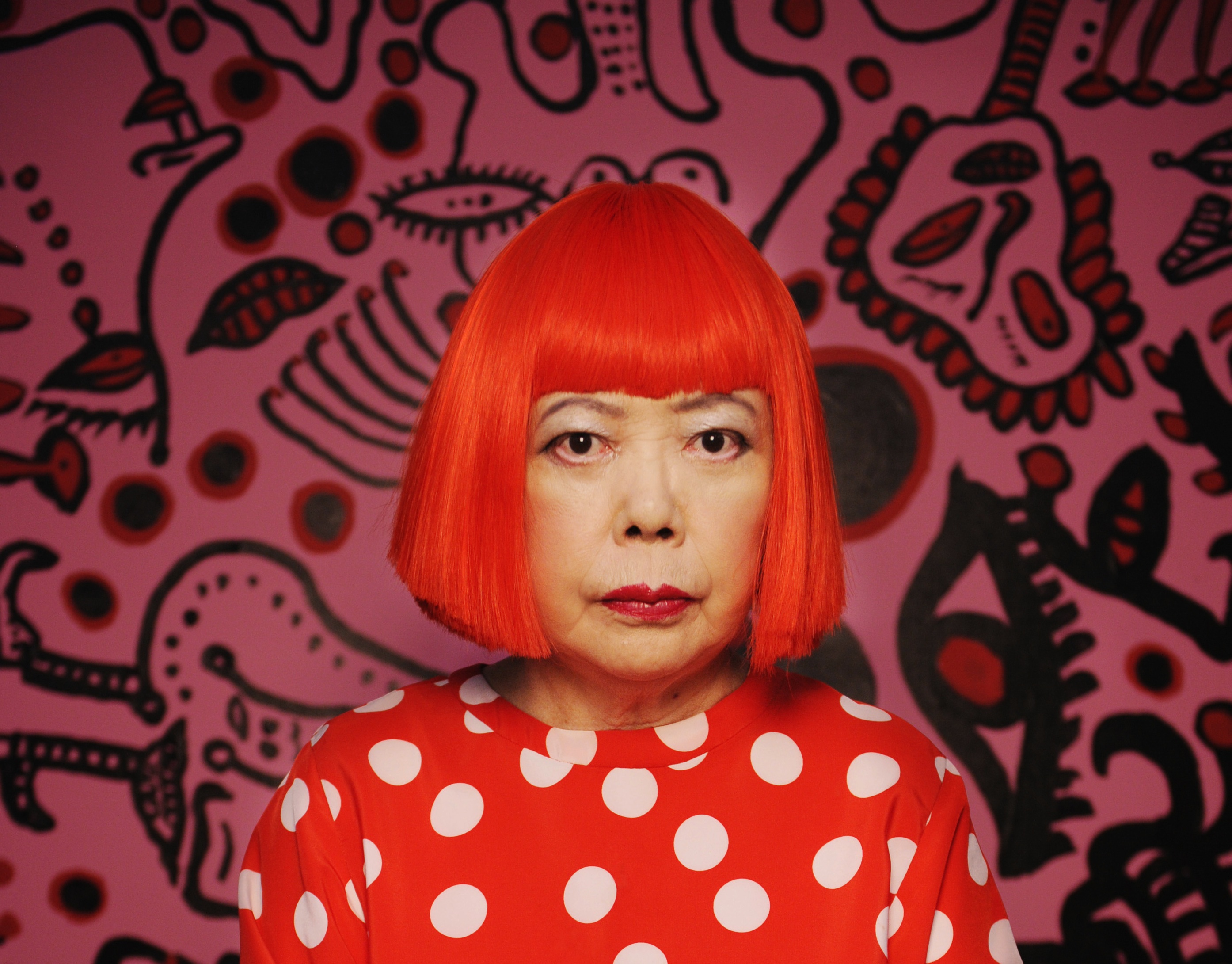 At nineteen, following World War II, she went to Kyoto to study the traditional Japanese style of painting known as Nihonga. During this time, she began experimenting with abstraction, but it was not until she arrived in the United States, in 1957, that her career took off. Living in New York from 1958 to 1973, Kusama moved in avant-garde circles with such figures as Andy Warhol and Allan Kaprow while honing her signature dot and net motifs, developing soft sculpture, creating installation -based work and staging Happenings (performance-based events). She first used mirrors as a multi-reflective device in Infinity Mirror Room-Phalli’s Field, 1965, transforming the intense repetition that marked some of her earlier works into an immersive experience. In 1973, she returned to Japan, where she has continued to develop her mirrored installations.

Yayoi Kusama: Infinity Mirrors is the first exhibition to focus on this pioneering body of work, presenting six rooms, the most ever shown together. The show traces the progression of Kusama’s iconic installations alongside a selection of her other key artworks, highlighting some of her central themes, such as the celebration of life and its aftermath. Ranging from peep-show-like chambers to multimedia installations, each of these kaleidoscopic environments offers the chance to step into an illusion of infinite space. In addition, visitors have the opportunity to grasp the significance of Kusama’s work amidst today’s renewed interest in experiential practices and virtual spaces.

For Yayoi Kusama, pumpkins represent a source of radiant energy. They are, perhaps, the artist’s most beloved motif, appearing in paintings, drawings, sculptures, and some of her most important installations. Both endearing and grotesque, the giant gourds have been a source of inspiration for Kusama since her childhood, when she was surrounded by her family’s seed nursery in prewar Japan. In one of her autobiographical poems, she writes, “Pumpkins bring about poetic peace in my mind. Pumpkins talk to me.”

The work seen here is a view in conjunction with Yayoi Kusama: Infinity Mirrors, an exhibition that traces the artist’s iconic Infinity Mirror Rooms over five decades. This landmark show aims to reveal the way in which the installations developed from a strategy of “self-obliteration” during the Vietnam War to a means of social harmony in the present. Each Infinity Mirror Room is presented alongside other key artworks, including a selection of the Kusama’s most recent large-scale paintings and soft sculptures.

…is an immersive environment that fosters an out-of-body experience, heightens one’s senses, and produces repetitive illusion through the use of lights and mirrors. Similar in appearance to stars in the galaxy, hundreds of LED lights hang and flicker in a rhythmic pattern that seems to suspend both space and time. The visitor becomes integral to this work as his or her body activates the environment while simultaneously vanishing into the infinite space. The ethereal nature of the installation can be traced back to the early 2000s when Kusama began making dimly lit mirrored rooms, a departure from her earlier brightly colored and polka-dotted spaces. Continuing her exploration of the transience of life and the inevitability of death, this installation creates a harmonious and quiet place for visitors to contemplate their existence, reflect on the passage of time, and think about their relationship to the outer world. 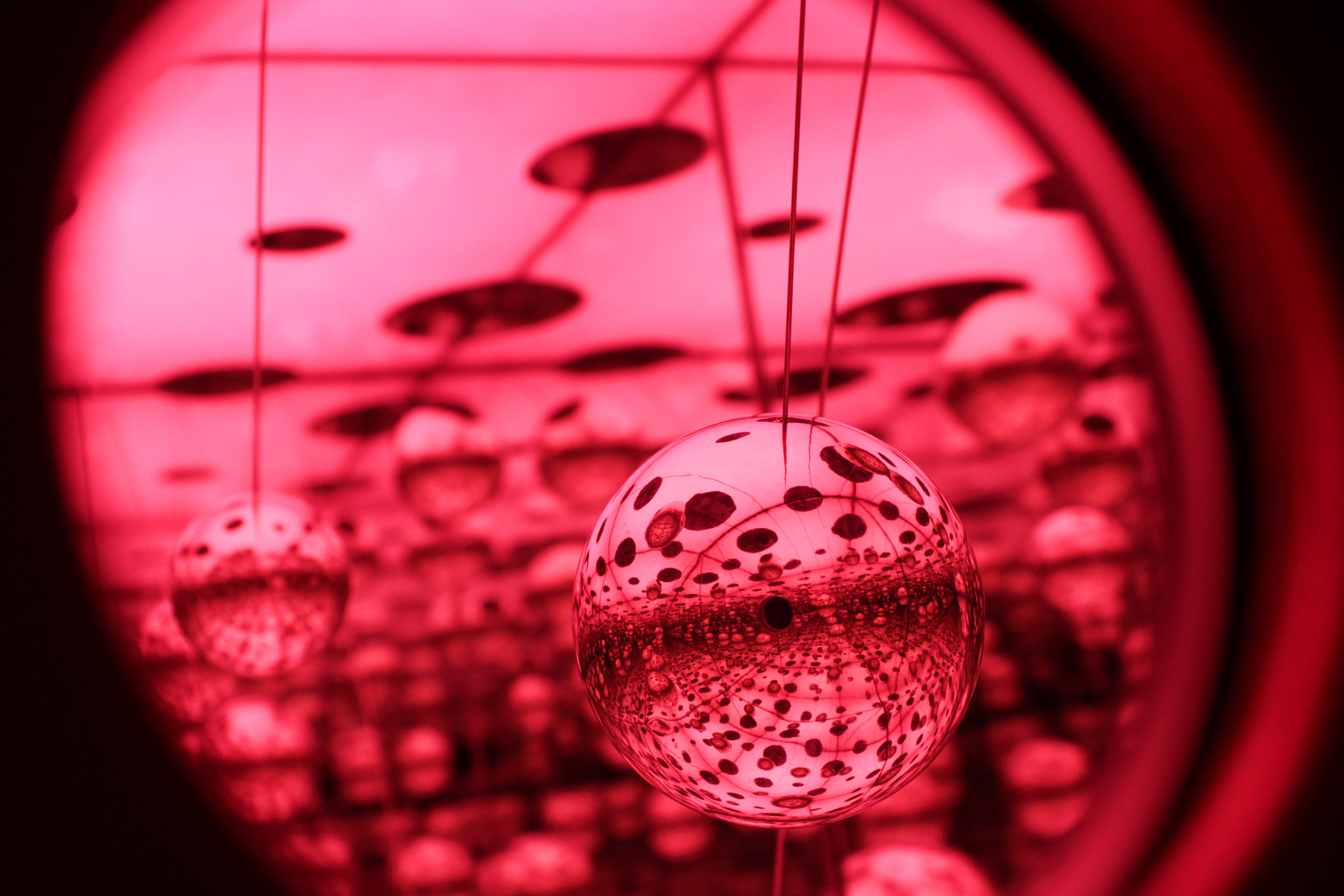 “One day, after gazing at a pattern of red flowers on the tablecloth, I looked up to see that the ceiling, the windows, and the columns seemed to be plastered with the same red floral pattern. I saw the entire room, my entire body, and the entire universe covered with red flowers, and in that instant my soul was obliterated and I was restored, returned to infinity, to eternal time and absolute space.”

In The Obliteration Room, Kusama provides visitors with colorful dot stickers that are to be used to eliminate the traces of the original white room through the act of communal “obliteration.” Recalling Kusama’s earlier polka-dotted environments and her performances that activated bodies through participation, this installation demonstrates her utopian desire for radical connectivity which she has described as “a way to free  each individual and simultaneously reconnect them in mutual obligation.” In this space, the polka dot acts as a universal equalizer,  a connector between all of us as we collectively participate in obliterating the environment by placing dots in the installation.

Begun in 2009, My Eternal Soul currently comprises over five hundred works. Kusama has said that through the series, she hopes to trace the “beauty of colors and space in the silence of death’s footsteps and the ‘nothingness’ it promises.” Within these paintings, which embody both the radiance of life and the sublimity of death, motifs from Kusama’s earliest works are often echoed, giving evidence to the singular vision that has drive her over the course of her long career. The effects of color vibration and exuberant patterning, for instance, are reminiscent of Kusama’s works on paper from the 1950s and 1960s. And, like her Infinity Mirror Rooms, which are simultaneously enclosed and expansive, colors and patterns pulsate within the bordered spaces of these canvases. The pattern of peering eyes is consistent with her tendency toward obsessive, endlessly proliferating images, and the voyeuristic pattern transforms flat color fields into shadowy depths. Other biomorphic forms, some resembling microorganisms, populate Kusama’s strange landscapes, and titles such as Aggregation of Spirits suggest that these paintings may be surrogates of human souls. 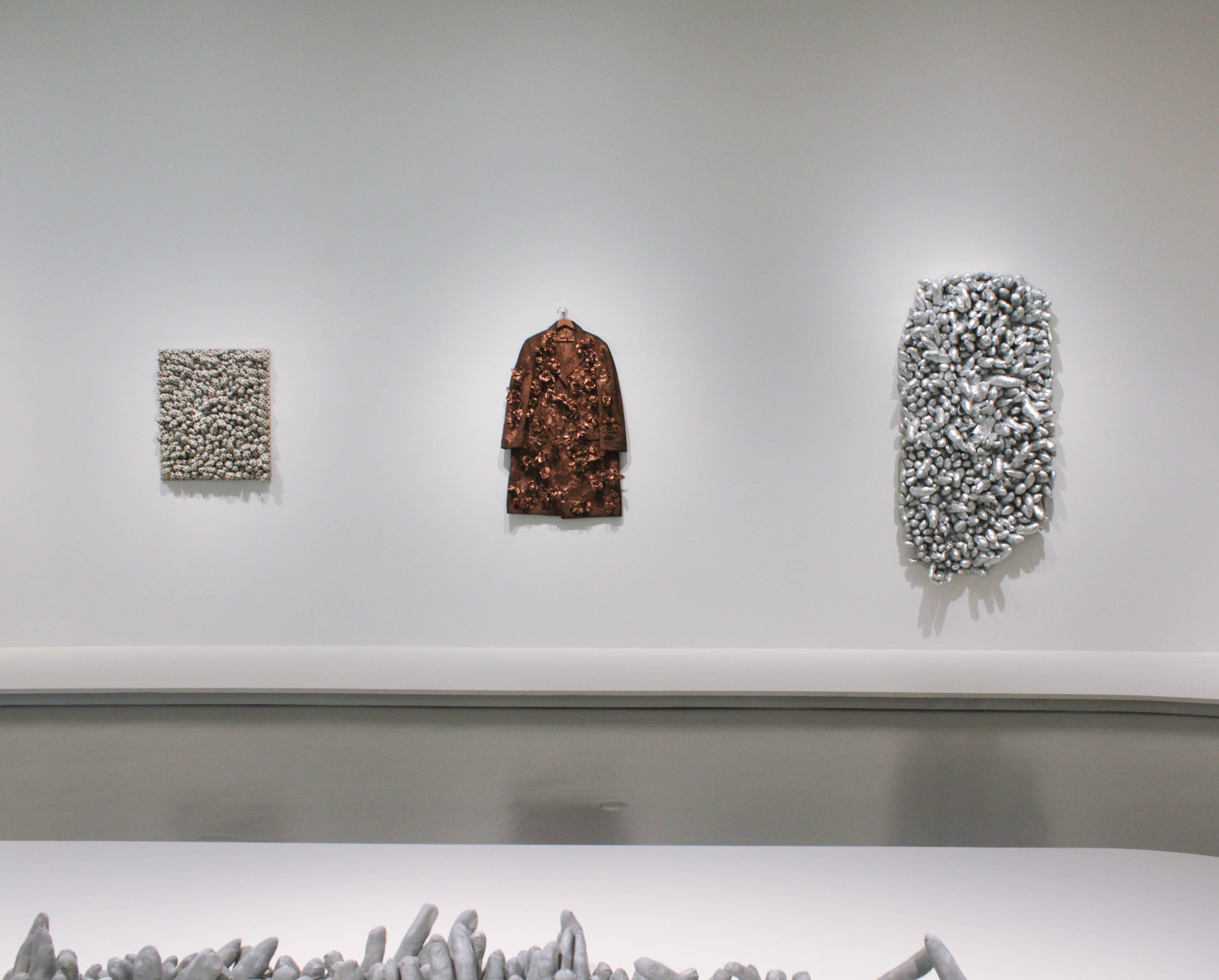 In the mid-1970s, Jannie Kounellis began creating installations that consist of pieces of statuary stacked in doorways or on tables and shelves. Here, the stone and plaster sculptures are recognizable as gods, goddesses, and warriors but the precarious arrangement suggests a breakdown of cultural coherence. The artist was a pioneer of Arte Povera, an Italian movement begun in the late 1960s by artists who opposed traditional aesthetic values and embraced commonplace materials. Untitled evokes the fragmentary state of post-World War II Europe, particularly in contrast to the coherence associated with Classical values.

-Excerpt from the museum